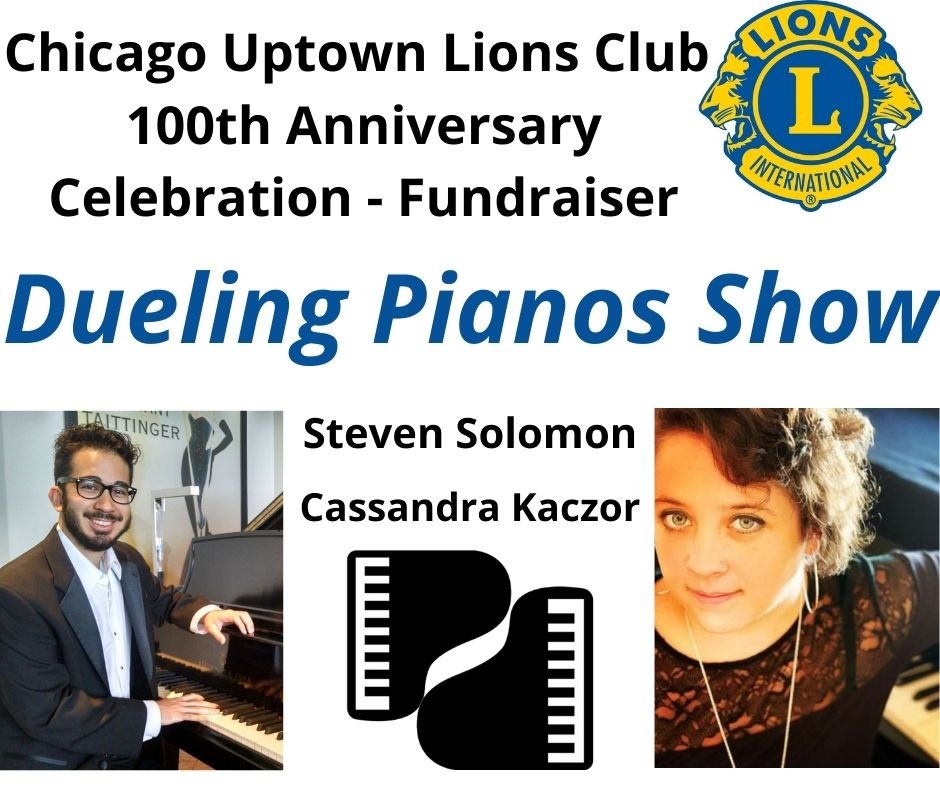 Add to Calendar 2021-06-06 19:00:00 2021-06-06 20:30:00 America/Chicago Chicago Uptown Lions Club 100th Year Charter Anniversary Celebration Fundraiser - A Virtual Zoom Dueling Pianos Show - 6/6/21 Tickets are only $25 per each person watching/listening to the celebration and Dueling Pianos Show (Discounts for more than 1 person watching from a single location). Proceeds from the fundraiser will go to help support the activities of the local RefugeeOne organization and the nationwide serving organization, St.Jude's Children's Hospital. More information on these organizations, the pianists performing, tickets, payment options, and the Chicago Uptown Lions Club is in the 'Story' section just below.

Tickets are only $25 per each person watching/listening to the celebration and Dueling Pianos Show (Discounts for more than 1 person watching from a single location). Proceeds from the fundraiser will go to help support the activities of the local RefugeeOne organization and the nationwide serving organization, St.Jude's Children's Hospital. More information on these organizations, the pianists performing, tickets, payment options, and the Chicago Uptown Lions Club is in the 'Story' section just below. 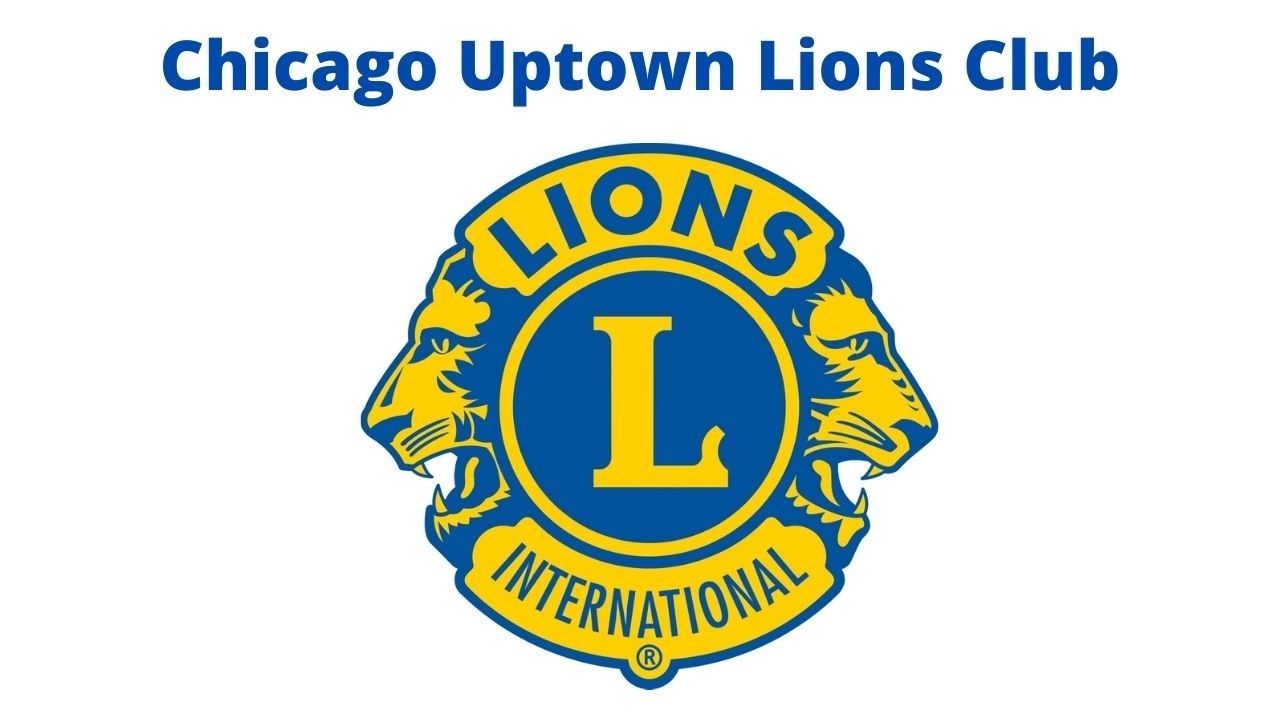 (more information on these charities is below)

More information about both pianists is further below.

•  The two beneficiary organizations we are supporting with funds raised, Refugee One and St. Jude's Children's Hospital

•  Resolution with Club History from The City Council of the City of Chicago, presented by  Alderman Andre Vasquez, Jr. Alderman, 40th Ward

Some things to know...

•  If you can not attend the celebration and piano show, but would like to support the Fall Fundraising efforts of the Chicago Uptown Lions Club, you can do that by also clicking on the 'Tickets - Donation' button above and making a donation only.

•  Ticket and Donation payment can be made here on our GiveButter fundraising site with a check, credit card, or by Venmo or PayPal, by clicking the "Tickets-Donation' button above.

•  If you would like to make a payment for tickets or donations with a check, please put it into the mail no later than Wednesday, May 26, if not sooner.

Make the check out to Chicago Uptown Lions Club and be sure to include clearly printed, your name, email address, and phone number.  Mail it to:

•  After you purchase your tickets here online (or we receive your check) and within a few days before the start of the fundraiser, we will send you by email, a link to click on to watch the celebration and piano show online on Zoom, and a special phone number to call if you'd like to listen to the concert with or without an internet connection

•  Additional payment information.  During payment check-out, you will be given the option to add to your payment the 'credit card processing fee.'  If you'd like not to cover this, click on 'edit' under it and uncheck the box.

You'll also have the option to make a 'tip' to our payment site provider, GiveButter. If you'd like not to give them a 'tip,' or tip another amount than the default $5, click the "other amount" and enter "0" or whatever amount you'd like.

There is also an option to hide my name or amount from public view.' If you'd like do to that, click the box next to it and pick an option.

Ticket purchases and donations are not tax-deductible.

•   For more information please contact us at   [email protected]

The Chicago Uptown Lions Club has been serving the Uptown and Edgewater community of Chicago for 100 years!

Our Chicago Uptown Lions Club is celebrating our 100th Charter Anniversary on June 6, 2021.

We are proud to be one of the oldest, longest-running clubs in the Lions Clubs International organization.

Our local Chicago Uptown Lions Club and clubs worldwide serve sight-impaired people and those with diabetes,  and those with other needs.  Through various fundraising efforts, the Chicago Uptown Lions raise funds for these and other humanitarian needs in our local community, for our local Lions District, State District, and Lions Clubs International.

The Chicago Uptown Lions Club also conducts various service events in the community including offering free hearing and eye screenings and has drop boxes in various business locations where you can drop off your used eyeglasses to be recycled and reused by those in need.  Our Club holds a monthly dinner meeting on the 2nd Wednesdays of each month at a local restaurant, where we meet to discuss our activities and for social mingling and fun.

Please support our efforts to assist the less fortunate in our community and join us at our special fundraising virtual online Chicago Uptown Lions Club 100th Charter Anniversary celebration and Dueling Piano's Show on June 6, 2021.

Please visit our website for more information about our Lions Club.

Every year, RefugeeOne serves more than 2,500 refugees and immigrants of all ages, ethnic groups, faiths, and backgrounds. Their primary focus is to assist these resilient individuals in becoming independent, self-supporting members of their new community.

​As the largest resettlement agency in Illinois, located on North Lincoln Avenue in Chicago, RefugeeOne has welcomed more than 18,000 refugees since 1982. RefugeeOne walks alongside refugees from the moment they land at O'Hare International Airport—welcoming them to Chicago and providing furnished apartments, English classes, job search support, mental health care, youth programming, and mentors to help them adjust to life in the U.S.

The mission of St. Jude Children’s Research Hospital is to advance cures, and means of prevention, for pediatric catastrophic diseases through research and treatment. Consistent with the vision of their founder Danny Thomas, no child is denied treatment based on race, religion, or a family's ability to pay.

St. Jude is leading the way the world understands, treats, and defeats childhood cancer and other life-threatening diseases. The hospital is located in Nashville Tennessee and provides it's services to children nationwide.

Our fundraising "Dueling Piano's Show" is being performed by renowned and award-winning pianists Steven Solomon and Cassandra Koczor.

Steven Solomon has been playing the piano since age 4 and has been playing professionally for over 20 years since age ten.  Over 2,500 performances, including his debut at Carnegie Hall at age 20.  Steven has performed in Chicago at Symphony Center, Millenium Park-Pritzker Stage, Jazz Showcase, and at numerous top music venues and at many city festivals.

Steven has performed at Disneyland, the Grand Lodge at Yellowstone National Park, The Liberace Museum in Las Vegas, and other locations around the country.  He has also performed recently in Europe in England, Bulgaria, Ukraine, and Greece.

He is the recipient of the Jazz Institute of Chicago's prestigious Wang Mentorship Award and has been honored with a special Resolution By the City Council of Chicago for his musical accomplishments.

Steven was born and raised in Chicago's Edgewater neighborhood and currently divides his time between residences here in Chicago and in Los Angeles. Steven has been a member of the Chicago Uptown Lions Club for the past 13 years. He performs nationwide at special events for corporations, select individuals, organizations, and celebrities.

Steven plays and sings all genres and styles of music. He also is a songwriter and performing artist, performing his original music under the moniker "Steve Lush."

You can find out more about Steven and his music at 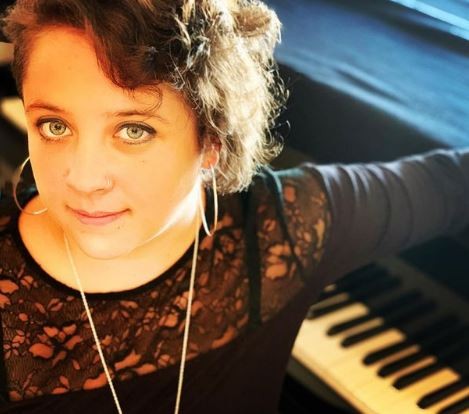 Cassandra Kaczor is also one of Chicago's most in-demand event pianists. She has performed piano, drums, bass, and as a vocalist in nineteen states, on cruise ships, and in Europe.  Pre-pandemic, Cassandra worked as a professional pianist and singer at Pete's Dueling Piano Bar in Rosemont, Illinois, and as a freelance teacher, performer, and composer.

Cassandra has her Master's degree in Music Composition as a Performing Arts Scholar from Roosevelt University’s Chicago College of Performing Arts, where she studied privately with Dr. Kyong Mee Choi. She won the Michael Hall Viola Composition Competition (2017) and the Zodiac Trio Competition (2016) during her graduate career. Prior to this, she studied with Curtis Curtis-Smith and Christopher Biggs at Western Michigan University.

You can find out more about Cassandra's music at:

History of the Chicago Uptown Lions Club in the Resolution below!

From the City Council of the City of Chicago,

WHEREAS, the founders and initial member organizations that became the Lions Club
International, dedicated at its founding to “unselfish service to others,” first met at the LaSalle
Hotel in Chicago on June 7th, 1917; and

WHEREAS, the Lions Club International has since that time been a part of Chicago’s history,
and has grown to serve worldwide with over 48,000 local clubs and 1.4 million members; and,

WHEREAS, the Chicago Uptown Lions Club was chartered on March 17th, 1921, with the
sponsorship of founding Lions Club International member Melvin Jones, and received that year
an award for the number of members who joined in the club’s founding year; and,

WHEREAS, The Chicago Uptown Lions formed a relationship with Combined Insurance for
many years, thus promoting projects to benefit the citizens of the Edgewater/Uptown area; and,
, with the help of major donations from W. Clement Stone, Robert McCormick, and a
$10,000 grant from the Chicago Uptown Lions, the Boys Club, still located on Sheridan Road
and now the Boys and Girls Club, was founded, and students from McKucheon Elementary
School were provided with a year of free membership; and,

WHEREAS, the Uptown Lions forged a relationship with the Southeast Asia Center including
inviting its staff to be included as members of the board of directors; and,

WHEREAS, the Chicago Uptown Lions Club’s Lions Candy Day supports the work of the Lions
of Illinois Foundation; and,

WHEREAS, the Chicago Uptown Lions Club continues to support the needs of visually impaired
individuals throughout the world by soliciting thousands of pairs of used glasses and other
items, which are transported to the Lions of Illinois Foundation in DeKalb, IL for preparation and
distribution; and,

WHEREAS, the Chicago Uptown Lions Club offers free vision and hearing screenings to
neighborhood residents through a mobile unit parked at the Broadway Armory and staffed by
Uptown Lions members as well as a trained person from the Lions of Illinois Foundation; and,

WHEREAS, the Chicago Uptown Lions continue to meet monthly both virtually and in person to
promote the needs of the Uptown and Edgewater areas as well as the initiatives of Lions Clubs
International (including hunger, the environment, childhood cancer, diabetes, vision
loss/blindness, hearing loss/deafness); and,

WHEREAS, members of the Chicago Uptown Lions continue their club’s proud tradition of
service as volunteers at community health fairs, senior fairs, blood drives, local festivals, and
many other events; and

WHEREAS, in this 100th year of the Chicago Uptown Lions club’s operation we find it fitting and
right to commend their service and their proud history in the City of Chicago; now therefore:

BE IT RESOLVED, that we, the City Council of the City of Chicago, assembled here on this 26th
day of May, 2021, do hereby celebrate the 100th anniversary of the Chicago Uptown Lions and
honor their service and devotion; and

BE IT FURTHER RESOLVED, that a suitable copy of this Resolution shall be prepared and
presented to the club and its officers as a symbol of our esteem.