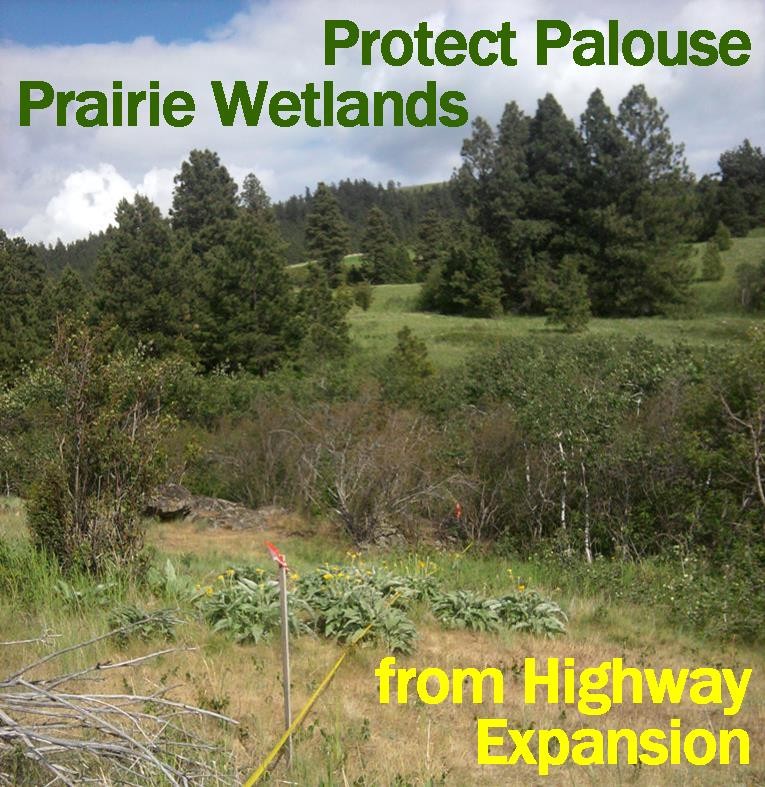 For the fourth time in 20 years, the Paradise Ridge Defense Coalition (PRDC) is challenging the Idaho Transportation Department (ITD) and now also the U.S. Army Corps of Engineers (Corps), in an ongoing citizen attempt to force selection of the least environmentally disruptive, central C-3 route for proposed U.S. Highway 95 realignment south of Moscow, Idaho. PRDC filed a legal complaint in the U.S. District Court of Idaho on March 22, 2022, against the Thorn Creek Road to Moscow highway project. This ITD project plans to reroute and expand to four lanes a six-mile segment of Highway 95, along the easternmost E-2 alternative route highest on Paradise Ridge. The E-2 route would significantly impact some of the few remaining tracts of native Palouse Prairie and several critical wetlands.

Since filing the March 2022 lawsuit, PRDC has hired two experienced wetland scientists and a surveyor, to thoroughly document the size of selected wetlands along the E-2 route, which ITD underestimated and the Corps incorrectly granted a Clean Water Act (CWA) permit to modify. Diligent PRDC legal efforts have overcome ITD and Corps attempts to restrict these technical experts from accessing and analyzing wetlands within the E-2 right-of-way, and have deterred highway construction in wetlands at the south end of E-2.

With this recent wetland information, PRDC plans to dispute findings in the legal record, forcing the Corps to retract the CWA “nationwide” wetland destruction permit that it issued. Hopefully, this decision would force ITD to apply for a more rigorous “individual” wetland permit that requires Corps comparison of the environmental impacts of alternative routes. This consideration should favor a CWA permit for the less destructive, central C-3 alignment, instead of E-2.

As PRDC seeks an injunction against destroying essential wetlands, the work of attorneys, wetland scientists, and a surveyor could cost up to $20,000. Without enough advance time to secure funding from prior grant sources, PRDC is reliant on contributions from concerned citizens and the regional community, to help cover the costs of this expensive phase of litigation and win this current federal case. Please support these earnest efforts by PRDC to protect Paradise Ridge and the Palouse Prairie! Donate generously soon, share this GiveButter site, and see the enclosed articles and PRDC links for further information. Thanks for your participation!

Since original project plans began in 1999, ITD has faced multiple setbacks from PRDC resistance to the significant environmental harms inflicted by the proposed E-2 route. Construction of E-2 would risk destruction of the native plants, wildlife, and habitat of the Palouse Prairie, a regional ecosystem reduced by agriculture and development to less than one percent of its original extent, with remnants on the highway-threatened, western side of Paradise Ridge. Among PRDC’s numerous environmental and safety concerns, the new E-2 route would spread invasive plants into native vegetation, and would jeopardize wildlife with potential vehicle collisions, as they move from forested ridge cover toward downslope water. Intact wetlands are crucial to this vanishing ecosystem, especially during the worsening droughts of the ongoing climate crisis. Despite the outsized number of fatal and injurious accidents on the current roadway, due to sharp curves, steep grades, and multiple intersections, more wind, snow, fog, and winter weather on the higher elevation E-2 route would make driving it more difficult than other alternatives.

In the first of three previous cases, PRDC successfully argued that this project requires an environmental impact statement (EIS), instead of the less detailed environmental assessment prepared by ITD. The coalition won a federal injunction in 2003, which forced ITD to complete an EIS. After 17 years of delay and environmental review of three proposed alternatives, ITD chose the eastern route. PRDC filed a legal complaint against the Federal Highway Administration and ITD in August 2016, alleging National Environmental Policy Act violations by the final EIS and record of decision. The U.S. District Court of Idaho narrowly favored the agencies. Subsequently, the coalition filed an appeal in October 2017, which the Ninth Circuit Court denied in December 2018.

In 2017, ITD applied for a Clean Water Act permit, to discharge fill material into Paradise Ridge wetlands for highway construction, and many Palouse and Northwest region residents sent comments against this project proposal. ITD realized that it could not satisfy the stringent environmental requirements of a CWA “individual” permit, which involves public input and a comparison of different alignments. So ITD requested and the Corps granted a less rigorous, CWA “nationwide” permit for wetland impacts, intended for smaller, non-controversial projects. These contested actions have allowed ITD to start ground work on its chosen E-2 route during 2022.

PRDC asserts that the Corps incorrectly issued this CWA permit to ITD, because nationwide permits require that affected wetlands cover a half-acre or less. In its earlier EIS, ITD not only described some of these wetlands as larger than a half-acre, but also documented the E-2 route as the most environmentally damaging of the three EIS-considered routes, which all meet the highway project’s safety and transportation goals. PRDC claims that the state agency improperly evaluated and arbitrarily reduced the documented size of several wetlands to less than a half-acre, to obtain this nationwide permit.

PRDC is a 501(c)(3) non-profit, public interest organization that works to ensure and enhance the public safety, environmental integrity, and natural aesthetics of Paradise Ridge and its environs. The coalition includes the Palouse Broadband of Great Old Broads for Wilderness, Palouse Environmental Sustainability Coalition, Palouse Group of the Sierra Club, Wild Idaho Rising Tide, and individual members. We welcome you to contact PRDC via email, website, facebook page, and/or mailing address.