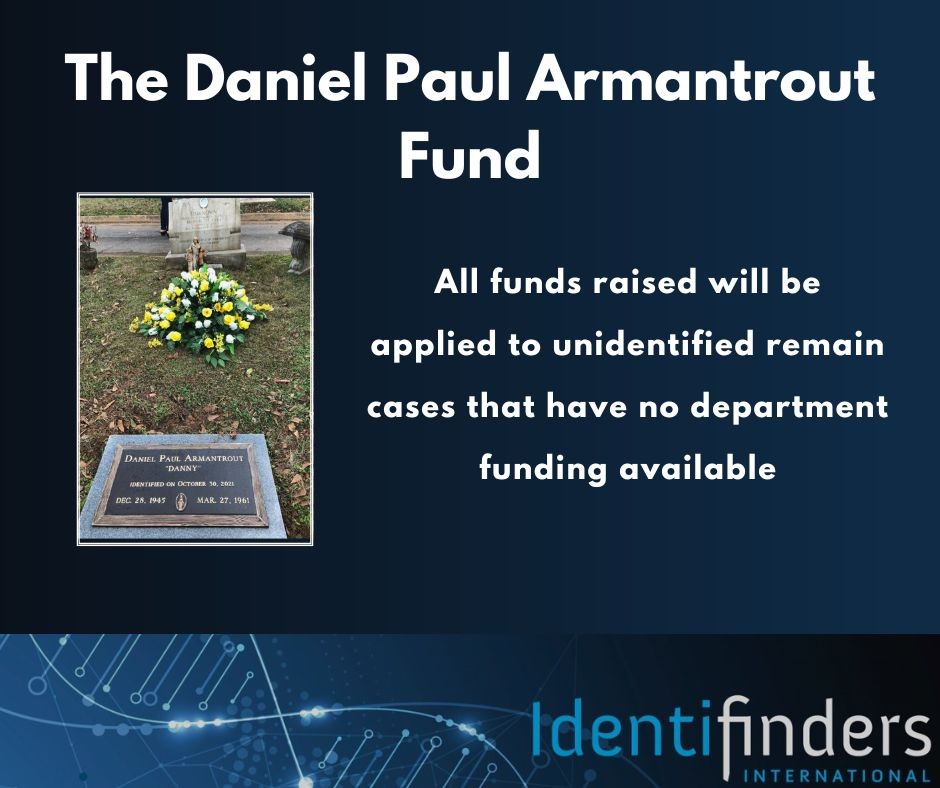 The Daniel Paul Armantrout Fund has been established in honor of a boy who died in a car accident in Centreville, Alabama in 1961. He remained unidentified for 60 years, until 2021 when Identifinders International was able to fund his case through a donation from Gray Hughes Investigates. Donations to the fund will go to law enforcement agencies that can not afford FGG on their own unidentified remains cases.

Our first case comes to us from Michigan (https://namus.nij.ojp.gov/case...) – a gentleman found in 2019 in Dearborn that we nicknamed “Dennis”. He was estimated to be between 34-86 years of age, and is believed to have been a Caucasian male. “Dennis” had gray or partially gray long wavy hair, and was found wearing an orange winter cap, Jerzees XL clothing with a distinct image of a child with a bicycle, tan pants and a Carhartt style jacket. He was also wearing a brown boot on one foot and a rainboot on the other.

It is believed the decedent was homeless, but surely he has family members who need to know what happened to him. Identifinders wants to bring his identity back to him and reunite him with that family. Donations made through this platform will be used to facilitate the lab work and genealogical process needed for Investigative Genetic Genealogy/Forensic Genetic Genealogy by the Identifinders International team.

We want to thank the public for their generous donations, as well as the Dearborn Police Department and Sergeant Jamison Carpenter for entrusting this case to us.

Amount needed to fund Dennis: $5380 - This amount covers two bone extractions, WGS, bio-informatics, upload to both LE approved databases and genealogy work by one of our team members.

Our second case comes to us from Minnesota - On 08/17/1996, a white female possibly in her 50’s or 60’s checked into the Regency Plaza Hotel, 101 N 9th Street, in Minneapolis MN. She gave the name Susan Watkins and listed a home address in Houston TX. She was approximately 5’8” weighing 240 pounds, with brown eyes, and greyish brown hair. She also wore wire rim with tortoise shell trim, bifocal glasses. On 08/23/1996 shortly after 1400, she was seen atop the parking ramp perched on the ledge, adjacent to the Regency Hotel, by an off-duty police officer working at the local Salvation Army. Law enforcement was dispatched and worked to bring her away from the edge. She was unwilling to give any information about herself or the reasons for her actions. After several hours of negotiating the individual fell from the roof to the pavement below. She was pronounced on scene at 1806. The Hennepin County Medical Examiner’s Office was unable to positively identify her in 1996 and she remains unidentified today.

We want to thank the public for their generous donations as well as the Hennepin County Medical Examiner's Office for entrusting this case to us.

Amount needed to fund "Susan Watkins" : $6200 This amount covers tissue extractions, WGS, bio-informatics, upload to both LE approved databases and genealogy work by one of our team members.