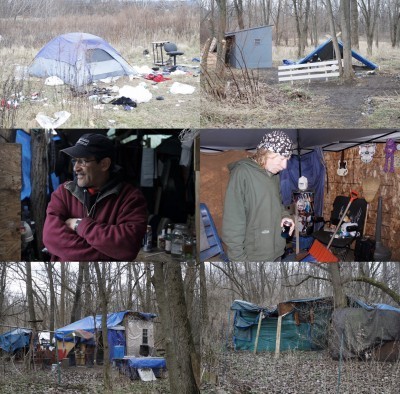 Homeless deaths in Ithaca are at an all-time high. In just under a year, 14 individuals have passed away. These challenges include addiction, not enough food and lack of warmth due to their outdoor living conditions. Last year Mike Foster, the manager for The Rescue Mission, a homeless shelter in Ithaca, reported 2016 as one of the worst years for Ithaca's homeless crisis. Now Foster reports that 2017 is 3-4 times worse than 2016.

Most of Ithaca's homeless population lives in an area known as The Jungle. Over 30 people live in this tent city located behind Ithaca's Walmart. This area is wooded and filled with people living in tents, forts, or sleeping bags. Many fend for themselves in the frigid, unforgiving outdoors which is especially apparent during this time of year. We want to give these people hope and help them survive through the winter.

Our friend Eddie, who goes by the nickname Sinbad, lives in fort constructed from blue tarps and plywood in the Jungle. Sinbad has observed the numerous deaths in the tent city this year alone. He can’t believe his homeless neighbors in Ithaca are dying left and right.

We have a serious and growing homeless problem in Tompkins County. We see the ravages of untreated addiction and mental illness push neighbors to the corners of our communities and an ever growing number of hard working individuals who are simply unable to keep up with costs of living and raising a family in the area. In Ithaca, rental availability is less that 1%. Ithaca is the 8th most expensive place to live in the country. Oftentimes, these individuals decide to live in The Jungle simply because they have nowhere else to go.

These are fellow human beings suffering in ways that are incomprehensible to the vast majority of us. Some of them are homeless because of circumstances well beyond their control. All of them hate their situation. They need hope. They need love. We’re dedicating our next several months to help these friends of ours who are down on their luck, especially as another brutal Ithaca winter is upon us.

We’re asking for your help. Please either donate on this Givebutter campaign or Venmo us @IthacaHomeless. You could literally save lives. The money we raise from this will be entirely and transparently be donated to the Rescue Mission & Second Wind Cottages for their work. Where will the funds go specifically? 50% of the money raised will directly benefit the Rescue Mission by adding more emergency shelter beds and funding the organization’s food pantry for low income or homeless individuals who are hungry. The other 50% of funds will go to the local nonprofit Second Wind Cottages specifically for the Jungle outreach. So half of the money raised will be used to buy resources for those living outside this winter such as propane/kerosene, heaters, blankets, food, hygiene products, first aid items, and other "save a life" care package items.

Any support you give will stay here in Tompkins County. Be compassionate. Be loving. Even $1 will help. Please share!!!