By Humans for Education

By Humans for Education 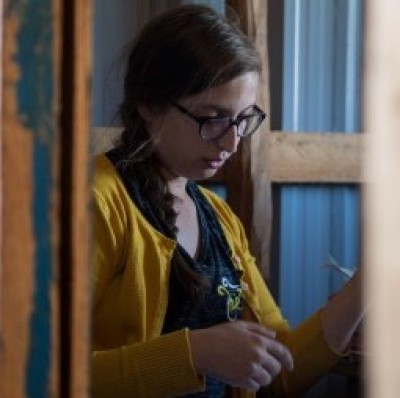 My name is Lucy. I am 1 of 18 children and this is my story of how I was the first woman in my village to start a school.

I grew up in Nkoilale, Kenya. I was the middle child of 18 siblings. I was born to the second wife of my father. There were 6 girls and the rest were boys. Out of those 6, only two who managed to go to school are me and my elder sister who later dropped out at 16 years old due to lack of school fees.

Our teenage years were not good. As women, we faced intense difficulties. Difficulties that are hard to even discuss. In our Maasai community, they didn't believe in education, especially for the girl child whom they valued as an asset to wealth and boys regarded as important because they were the ones who are to be educated. That's the reason why almost 70 percent of our girls here are illiterate. Girls were to be circumcised earlier so that they could be released and married to the old men to take care of them at that old age. A lot of girls later are left widows at an early age after the death of their 'husband'. These girls later are disrespected, isolated, and left with kids whom they are not able to feed or provide for their basic needs. That's why I tried to find ways through which I could empower fellow women from this captivity of being domesticated at home by starting a group for a beadwork organization of 30 ladies aiming to create more money to sustain them because they were expected to get married at twelve to fifteen years of age.

For those of us who could go to school, we still would walk long distances, typically around 7-10 kilometers from home to school. This often led to people dropping out of school early or early marriages. Dealing with the difficulties of poverty and watching my friends deal with it was too much to bear.

I was determined to have a different life I spent almost all of my free time with books or newspapers or even drawing. My father took notice and realized that I needed to be in school. At that time, it was unheard of for girls to go to school, and if one could be taken it was regarded as foolish. My father didn’t care, he sacrificed his status to the community and took me to school to pursue my dream of becoming a teacher.

After I finished my high school education, I became a teacher. I was enthusiastic and excited about the ability to educate new minds and teach them what I knew. I was placed in a public school where there was a high pupil-to-teacher ratio and no curriculum on FGM. This is where I arrived at the idea of starting my own school. I decided to name it Olbolet Siana Hills Academy. Olbolet is a Maasai name meaning, “the key”. I wanted to open the minds of these young kids so they could have a bright future free of FGM and poverty.

Opening a school wasn’t easy, especially as a woman. It took a lot of time and I had to slowly secure community support. In the beginning, it started as one muddy classroom and five pupils where I was a teacher. I was able to gather support from the community by inviting them to see the small school and eventually I got some support. The support was small at first, such as stationery and desks, but then it grew and grew and became completely transformed with full community support including local and government support.

We started with five students in 1 mud classroom and me as the teacher, we now have 86 pupils, 6 teachers, 6 classrooms, a kitchen, and an office.

I am proud to say I am fulfilling my dream. I am the Founder and CEO of Olbolet Siana Hills Academy in Nkoilale, Kenya!

And now a manager of Olbolet academy and a CEO of Olbolet feedlot enterprise in Kenya, Narok county near Maasai mara.

Once COVID came a lot of families were affected and many lost their jobs, meaning they couldn't manage to pay for their school fees. For some of the students we managed to educate them for free, but we realized that this was not a good long-term strategy. So I reached out to Human for Education and applied to their program where together with my team we underwent rigorous vetting, training, and extra educational programs until we succeed.

Together, with Humans for Education, we are working to build a farm that will sustain our school and potentially enable me to do community-wide FGM training and even more for the community.

We believe that ordinary people can make extraordinary differences and that every child deserves the right to a quality education.