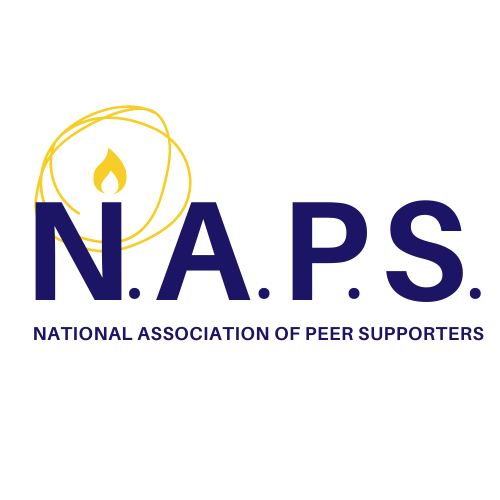 N.A.P.S. (National Association of Peer Specialists) was started in 2004 by a dedicated group of peer specialists in Michigan. We later became the International Association of Peer Supporters, Inc to reflect an increase in international members and a desire to include all peer supporters, not just those with the title “peer specialist,” and registered as a 501c3. Steve Harrington was instrumental in getting and keeping the group going, including establishing N.A.P.S.’s annual National Conferences around the U.S., with its first in 2006. Over the years, N.A.P.S. has presented 41 webinars – 29 are recorded and still available for anyone to watch. Members may take a quiz and receive a certificate of contact hours of ongoing education.

In 2012, N.A.P.S. embarked upon an inclusive process, with assistance from a panel convened by SAMHSA, to establish Practice Standards for the emerging profession of Peer Support as the first step in a possible national credential. Following a series of national focus groups and surveys. Over 1000 peer support providers participated, 98% agreed with the core values and practice guidelines published in the summer of 2013 as the National Practice Guidelines for Peer Supporters. Over 18 months from March 2018 to September 2019, a workgroup conducted multiple discussions, surveys, and focus group sessions on developing the National Practice Guidelines for Peer Specialists and Supervisors to complement the 2013 Guidelines for Peer Supporters. These guidelines were presented at the 2019 conference in San Diego.

Also, during this time, N.A.P.S., in partnership with DBSA, participated in the SAMHSA Recovery to Practice initiative and developed Next Steps, an advanced education curriculum for peer support providers. A curriculum book was available as an open-source document, several videos, and a 4-day training with an optional 5-day to become a Next Steps facilitator. The program was presented several times in Atlanta, Ohio, New York, Chicago, and Texas, and many facilitators continue to share this training.

The Future of Peer Support Work

As we look to the future, we continue conversations with peer support workers in other countries to explore the establishment of an international coalition and continue to welcome individuals from across the world as both members and volunteers. N.A.P.S. also plans to build strong partnerships with international organizations, participate in global gatherings and coalitions, and advance collaborative, peer support initiatives worldwide.