The Poverello Center has a rich and intriguing history. The name, our founder, the richness of community involvement and engagement with volunteers all have fascinating elements worth exploring.

What’s in a Name? 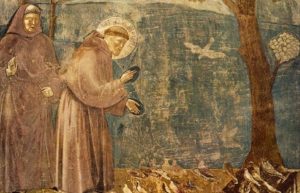 Il Poverello is the nickname associated with St Francis of Assisi. Founder of the Franciscan Order, born at Assisi in Umbria, in 1181 or 1182 — the exact year is uncertain, but he died there, 3 October 1226. Canonized on July 16, 1228. He worked against great odds including lack of resources to help the less fortunate.

Saint Francis of Assisi abandoned a life of luxury for a life devoted to Christianity after reportedly hearing the voice of God, who commanded him to rebuild the Christian church and live in poverty. He is the patron saint of animals and the patron saint for ecologists. Il Poverello is translated, the poor little one.

Our Founder Father Bill Collins was a Franciscan priest. He was part of the Friars Minor Capuchin (O.F.M. Cap.) which consists of religious and lay men and women who try to emulate St. Francis’s spirit by performing works of teaching, charity, and social service.

Against all odds, Father Bill and his group of volunteers helped feed people in the 80’s who were dying of Acquired Immune Deficiency Syndrome (AIDS). The stigma was great, resources few, but he worked tirelessly to gain the resources to show love to those who at the time knew little hope. His affinity for Il Poverello led to the organization’s name, The Poverello Center.

Founded in 1987 by Father Bill Collins (1931-2017) and his dedicated group of volunteers, the goal was to feed people who were dying alone and rejected by society in large numbers with complications from AIDS. The crisis was so devastating, and he performed so many last rites, that he began to keep a “book of names” so that the community would not forget how many died and who they were. Sadly, that book was lost to time so we must remember those who’ve passed in our hearts.

A COPY OF THE OFFICIAL REGISTRATION AND FINANCIAL INFORMATION MAY BE
OBTAINED FROM THE DIVISION OF CONSUMER SERVICES BY CALLING TOLL-FREE (800-435-
7352) WITHIN THE STATE. REGISTRATION DOES NOT IMPLY ENDORSEMENT, APPROVAL, OR
RECOMMENDATION BY THE STATE.