Coins for our Community Give-a-thon: Celebrating Ten Years of Transformation and Funding a Movement

Coins for our Community Give-a-thon: Celebrating Ten Years of Transformation and Funding a Movement

Join us virtually for a celebratory and fun evening! 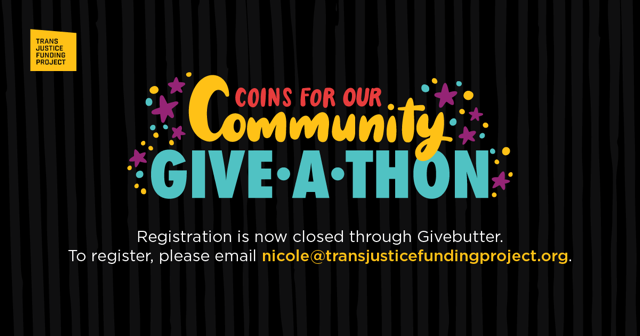 Coins For Our Community Give-A-Thon: Celebrating Ten Years Of Transformation And Funding A Movement

We could not do this without our amazing Host Committee!

Thank you to our wonderful sponsors:

The Trans Justice Funding Project is a community-led funding initiative founded in 2012 to support grassroots, trans justice groups run by and for trans people in the United States, including U.S. territories. We make grants annually by bringing together a panel of six trans justice activists from around the country to carefully review every application we receive. We center the leadership of trans people organizing around their experiences with racism, economic injustice, transmisogyny, ableism, immigration, incarceration, and other intersecting oppressions. Every penny we raise goes to our grantees with no restrictions and no strings attached because we truly believe in trans leadership.

Ten years of Transformation and moving millions: A Brief History!

Since co-founders Karen Pittelman and Gabriel Foster first dreamt up Trans Justice Funding Project in 2012, we’ve been awed by the incredible applicants seeking support for their life-changing, life-giving work. Our very first grantmaking year in 2013 brought in more applications than we could have ever expected and we moved an astonishing $55,000 to 22 grantees. Since then we have grown immensely–and with your support, we’re now moving over a million dollars each year to over 300 groups around the country!

TJFP’s first few years were spent building our power, figuring out our processes, and refining our grantmaking fellowship program. We grew bit by bit, funding under 100 groups a year. In 2016, there was a huge surge in trans justice organizing, reflecting both increases in trans visibility and the needs of trans communities in response to Trump’s election. Whatever the case, it was clear that grassroots trans activists needed unrestricted funds to do what they needed to do for their people. Between 2016 and 2017, our grantee community grew and we were funding over 100 groups per year, increasing our grant sizes from $1,500, $2,500, and $5,000 to $2,500, $5,000, and $10,000.

In 2018 and 2019, we continued to experiment with the ways we do things at TJFP. With ever more brilliant applications streaming in each year, we introduced the “ReUp”, which is a way for each year’s grantees to opt in to a second year of funding without having to reapply. We hoped this would make it easier for our grantees to access funding and reduce the number of applications our grantmaking fellows needed to read each year. During this time, we also grew from a two person to a four person staff, increasing our capacity internally as well.

At this point we are a 5-person organization funding over 300 groups and moving over 1.5 million dollars each year. We’ve had to pivot just as our grantees have had to adjust to the constraints of the COVID-19 pandemic. We are seeing groups we first funded in 2013 grow beyond our budget cap of $250,000, or collaborate with and uplift newer groups applying for funding. We have seen groups shift their work over the years, or close entirely so their members could move on to other things. We have witnessed some of the most extraordinary, radical, and life saving grassroots trans justice organizing of our time, and also know that this is part of a legacy that our trans ancestors have been laying the groundwork for ages.

Each of these grassroots groups are part of a legacy of Trans Justice, and we are honored to have been able to support their dreams and visions for a more liberated future.

Woven into the fabric of Trans Justice Funding Project is the belief that change is an essential tool for growth and liberation. We remain a funding “project” because we know that there is no blueprint to doing this work, especially if we stay committed and rooted in our values and our mission of being completely community-led and distributing funding with no strings attached. Our work is inspired by and fueled by the work of our grantees. And each year we are made very aware that there is no one way that Trans Justice looks for our grantees and within each application, we witness the ways these grassroots groups have had to pivot their strategies to respond to the physical environment, political climate, and community needs. So we try to do the same and continue to transform and grow every single day as we continue to fund Trans Justice for years to come.

Make no mistake, it’s been a challenging decade. But we also want to recognize how far we’ve come! With a full decade’s worth of applications holding the words of countless grassroots trans justice organizers from across the country, we understand we hold a precious resource and record of trans history and activism. Longtime TJFP friend, volunteer, and consultant Dr. V Chaudhry, and new friend A Dionne Stallworth, are working on a 10-year retrospective report based on these applications as well as interviews with TJFP alumni, previous grantees, and other leaders in the trans justice movement.

And keep an eye out later this year for an illustrated history of Trans Justice Funding Project! We hope this abridged version sparked your interest–we’ll be working with artists and designers to create an exciting and vibrant way to learn more about the history of our organization and our community.